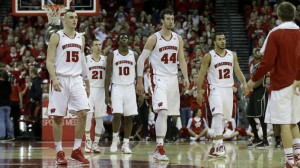 MADISON, WI – JANUARY 07: Frank Kaminsky #44 of the Wisconsin Badgers along with Sam Dekker #15, Traevon Jackson #12, Nigel Hayes #10, and Josh Gasser #21 of the Purdue Boilermakers during the second half against Wisconsin Badgers at Kohl Center on January 07, 2015 in Madison, Wisconsin. (Photo by Mike McGinnis/Getty Images)